The Power of Tension Blogfest 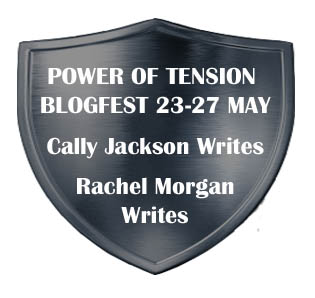 My friend Cally over at Cally Jackson Writes, has convinced me to enter the Power of Tension Blogfest that she and my friend Rachel over at Rachel Morgan Writes are running this week.  It ends in about 10 minutes, so talk about squeaking in under the wire... there's a bit of tension right there!

I explained to Cally that moments of tension in picture books tend to be about 7 words long and not at quite the level of the novel entrants in this blogfest.  Her response was something akin to, "Pshaw!  Balderdash!" and she encouraged me to break out part of a NIP (that's my acronym for Novel In Progress because why refer to it as a WIP like everyone else when I'm just that daring-to-be-different?)

So here it is.  (Cally also promised no one would throw spit balls or laugh - and I WILL hear you!)

Oren and Beck, 2 12-year-old boys, are running from the evil King Feridon and his army.  They don't know why he's after them, but they know if he catches them they will, in all likelihood, be killed.  Racing through Dreadwood, they become separated.  Beck, with 50 soldiers behind him, struggles desperately to stay ahead of the war horses on his small farm pony....

Hating to ask for even more, Beck drove his heels into Cedric’s sides, urging him on again.  The generous pony tried courageously but he had little left to give.  His hooves pounded on relentlessly, but his chestnut coat was soaked with sweat and his breath came in great rhythmic gusts.  His ears lay back against his head, not pinned tightly as in anger, but as if he hadn’t the energy left to prick them forward.  In spite of his greathearted effort, as the ground before them rose again he began to slow.
The change in pace was almost imperceptible at first, but as he battled the continued incline it became more noticeable, and Coulter and his swift bay gained inexorably on the laboring pony.
Beck looked back.  The bay was only a few horse-lengths behind.  Hating himself, Beck reached back and slapped a hand across Cedric’s flank, hoping that deep down the pony had a reserve of energy, but Cedric’s pace didn’t change.
Beck glanced back again and the bay was so close now he could see the crescent-shaped swirl of white hair on its forehead and the pink lining of its flaring nostrils.  But the proximity of the bay horse, who was tiring, too, was not nearly so frightening to Beck as the grim expression of the man who rode him.  That man, a total stranger who could not possibly have had anything personal against Beck, wore a mask of determination that made Beck shudder, as if his entire life depended on capturing a boy and a chestnut pony.
So there you have it...  I was limited to 300 words (there are 260 here.)  Did I manage any tension, or ...  Hey!  Wake up!

I forgot to add no falling asleep to no throwing spitballs or laughing!

Check out the other entrants here!