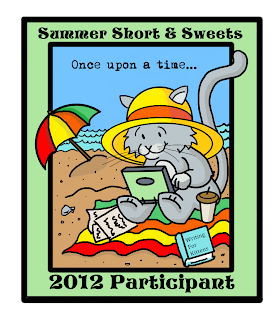 I have returned from The Pine Tree State where I still did not see a moose!  I saw signs - "Moose Crossing", "Watch for moose in roadway" and just plain 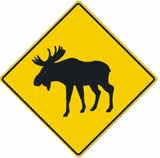 but although pretty much everyone else in the northern hemisphere has seen an actual moose, I still haven't.  Don't get me wrong... I do not want to meet one in my car at 60 mph!  I just want to see a real one looking serene in his or her natural surroundings :) preferably alongside a cute baby moose :)

Anyway, onto business.  The winner of the June pitch pick, whose pitch will go for a read by editor Erin Molta, is none other than the fabulous Lori with her pitch for These Little Piggies!  Congratulations, Lori!  And congratulations and thanks to all who bravely put forth their pitches - you are all winners in my book just for stepping up to the plate!

In other Would You Read It news, the vote for whether or not to keep the system the way it is was TOTALLY evenly split and indecisive!  So now what?  I don't know.  I'll have to think on it.  While I think, nothing will change.  If anyone has thoughts or opinions, please share :)

Today's Short & Sweet will work best if you don't peek :)  I'm not sure quite how to accomplish that on a blog post, so let's go on the honor system - no scrolling down yet!

Now pick a number from 1-10 again and write that down.

Now do it again.

And now one last time.

(BTW, it's okay of you pick the same number more than once.  If you want to make it really random you can roll a pair of dice and just discard any 11s or 12s you roll, or take an ace-10 out of a deck of cards and randomly choose cards.)


Now, use your first number to select from this list:


Use your second number to select from this list:


Setting:
Use your third number to select from this list:


Time:
And use your last number to select from this list:


Situation/Challenge:
You should now have a randomly selected character, setting, time, and situation/challenge - everything you need to prompt a story!

In the comments below, list the 4 you got and write 50-100 words of whatever story they suggest to you!  Don't agonize!  Don't over-think!  We're all among friends.  Just write!  All we're doing here is priming the pump.  If all you can squeeze out is 50 rusty words, that's fine!  You wrote 50 words in the middle of your hectic, busy day!  But maybe, just maybe, 25-50 more will trickle out a little less rusty, and maybe after you've written your 50-100 here you'll find you've got a gush of clear water rushing forth and a whole  new story will well up and land on your list of accomplishments for today!

Oh, and if you find it's too hard to include all 4, it's okay to just use 1, 2, or 3 of the prompts you picked - the exercise is just to get ideas and words flowing :)


Character #3 - a zookeeper with a lost animal
Setting #7 - an enchanted forest
Time #1 - the first day of school
and Situation/Challenge #5 - someone has lost something (which accidentally overlaps with the character description so I'm only going with one lost thing!)
Given these prompts, I might write the following 50-100 words:

George took his job as zookeeper of the enchanted forest very seriously.
At the end of each day he checked that the unicorns had plenty of magic meadow grass.
He made sure the griffin’s nest was comfy and the sphinx had his book of riddles.
He tested the mermaids’ pool – it would never do if it was too cold!
He made sure the dragon had plenty of fresh water in case he set his bed (or anything else!) on fire.
Then he double-checked that all the cages were locked, said, “Good night my friends!”, and went home to his supper.
But on the first school day of the year, with Miss Venus's class field trip due any minute, George arrived to find that the Loch Ness Monster, had gone missing!
“How can this be?” he moaned, wringing his hands.  “I was so careful!  And Nessie’s cage is still locked!”

P.S.  For anyone who's just finding Summer Short & Sweets, full info is on that link or above in the tab :)

Email ThisBlogThis!Share to TwitterShare to FacebookShare to Pinterest
Labels: Erin Molta, pitch pick, Summer Short And Sweets, Would You Read It