Cori Doerrfeld Shares The Creation Of Her Picture Book Little Bunny Foo Foo! And Then Susanna Shares One Of Hers To Make Up For The Glitch! 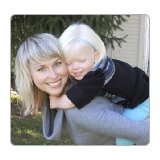 You may remember Cori.  She did an interview and giveaway here in February 2011 (see Part 1 and Part 2.)  She is a talented author/illustrator who has illustrated multiple books, including two for Brooke Shields as well as the recent Seashore Baby and Snowflake Baby, but in the last year she has also published Penny Loves Pink and Little Bunny Foo Foo which she both wrote and illustrated.  I hope you will enjoy her entertaining tale of Little Bunny, which makes for perfect spring fun and a great Easter gift :)
Take it away, Cori! 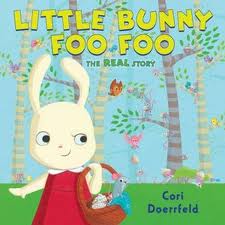 All my stories find their origin in childhood. I am inspired by my own childhood, as well as the ones I've witnessed as a daycare teacher, nanny, and mother.  When I was little, I loved the bizarre, the unique, and even the scary.  I loved Stephen Gammel's illustrations in Scary Stories, and I was a huge Tim Burton fan.  When I started creating stories and characters of my own, I was naturally drawn to similar themes.  At the daycare, we sang every children's song known to man, and the one that always stuck out as odd to me was "Little Bunny Foo Foo", especially the way my coworker sang it.  The traditional song turns the bunny into a goon, but my coworker always turned the bunny into a monster instead.  The children just loved the idea of a bunny transforming into a monster, and so did I. Images of a seemingly harmless bunny hopping through a forest kept creeping into my mind. What would she look like if she turned into a monster I wondered…
As both an illustrator and an author, I usually visualize a story before I write any text. Based on my initial thoughts, I'll do a very rough thumbnail version of a book.  This way I can see right away how the art will flow one page to the next, as well as how to best break up the text.  My original version of “Little Bunny Foo Foo" was much darker and intended for an older audience. 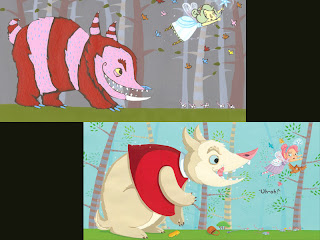 My husband and I attended several comic conventions a year to sell and promote our work, and this is where my initial version premiered.  We printed little paperback copies off the computer.  It was always a good seller, and kids seemed to like it too.  The violence was no worse than the Tom and Jerry cartoons so many of us grew up with.  When a publisher showed interest in the book however, I was asked if I could find a way to push the story even further and to tone down the manic, mallet wielding bunny.  The editor suggested that Bunny Foo Foo could use something softer to bop the mice, like an oven mitt.  It took me nearly a year to rework the story.  I struggled quite a bit at first.  I was not only attached to my original version, but I found it difficult to formulate just how I could push both myself and the song in a new direction.  The editor’s suggestion of an oven mitt was stuck in my head, and one day the idea just hit me all at once.  I find a lot of my story writing problems are solved this way.  If I just think on an issue long enough, eventually lightning will strike.  Obviously if Little Bunny Foo Foo is bopping mice with an oven mitt, it’s because they stole the cupcakes she had just finished preparing! 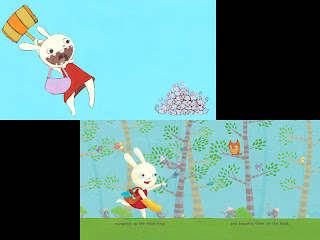 I know many people liked the way Foo Foo bopped the mice due to random, unknown reasons in the original version, but I really liked the idea of telling one story with the text, and another with the illustrations.  In my finished, published version of Little Bunny Foo Foo, the text is only a slightly modified version of the classic song.  The illustrations however, reveal a lot more to the story; showing an increasingly frustrated rabbit simply trying to recollect her cupcakes.  This plot line gave me several opportunities to create fun little scenes where mice and birds collaborate to steal Foo’s cupcakes, as well as the chance to show why the Fairy meets her fate in the end.
Little Bunny Foo Foo is my second self-authored title, and was therefore still a learning experience.  Every story, even once it is picked up by a publisher, goes through several transformations.  The end result is more of a team effort than I realized before becoming a published author.  An author must learn to balance input and requests from the publisher with maintaining the integrity of the original idea.  Mallets may become oven mitts, but sometimes cupcakes with sprinkles are the perfect way to sweeten a strange and disturbing bunny’s desire to scoop up field mice, and bop them on the head.
I hope you all enjoyed this glimpse into the creation of a picture book and will all feel inspired to go out and buy Foo Foo for your friends and relations! :)

I realize it didn't turn out to be quite what I promised...!

Chalk it up to Cori having a new baby and me being over-scheduled and both of us feeling time-crunched resulting in a slight miscommunication...  It turns out Little Bunny Foo Foo, since it's based on the familiar rhyme, didn't actually change text at all from pre- to post-published, so it's not a good candidate for comparison.

Luckily, I know another writer... and I finagled my way into her files... :)

SO.  Since I want to deliver on my promise, I hope you will accept something of mine instead of something of Cori's for now.  Cori has another book in the works that she thinks will be much better suited to this type of post, but since it's not published yet, we'll have to wait for that one.  Meanwhile, hopefully this will suffice:

I'm going to share the creation of Freight Train Trip with you, if that's an okay substitute for Cori.  I chose it because most of my other books had such minor changes from my version to the published version that they wouldn't be very interesting for this exercise.  But Freight Train... that's another story :)

I got the idea for this story from my children and my nephews, but particularly from my nephew, Eli, who was going through a heavy train phase when this story came to mind.  I wrote it in rhyme because I wanted to capture the rhythm of the train.

I tried VERY hard to get this lined up so you could see the changes easily.  It works on my preview.  I can only hope it comes out right on your view!  Please forgive that one tiny line of chugga chuggas after "trains rush past..."- it was supposed to be on two lines but just wouldn't fit right.  (And if it doesn't come out right, let me know, but I probably won't have time to fix it until Thursday!)


The changes they asked for were:
1.  Make it more dramatic.
2.  Put in the articles.  (You know.  All the "the"s.)
3.  There was some disagreement as to how the chugga chuggas read.


They asked for more drama.  I gave them more drama.  Funny that the only critics of this book have said it's too dramatic :)


As for the articles, I liked the rhythm better without them.  I fought for them.  But I was out-voted by the copy editor who convinced the editor that it wasn't proper English without the articles.  "What about Sheep In A Jeep?" I said desperately, but alas, it was not to be and the articles went in.


We ended up changing the chugga chuggas so no one would stumble, although I confess when I read this aloud, I say it the original way, which makes sense to me, and sounds more train-like :)


So what do you guys think?  Is it helpful to see this?  Which version do you like better?


Having spent way too much time trying to get these columns to line up, I really hope you guys find this useful! :)  Please let me know.  And of course, if you have questions, fire away in the comments.


And now, I'm off to 2 days of intense school visiting (although I'm still planning to get Would You Read It up tomorrow... somehow... :)) so forgive me if I don't get around your blogs as much as usual!  I'll catch up eventually :)


(And, just so you know, in a couple days I'm going to pull some of the verses from the published version because I'm not really sure I'm allowed to post it like this, so learn from it while it's up :))