Phyllis's World Tour Begins! And Oh Susanna - What Is An "Editorial" Agent?

Phyllis has been sighted in the Mojave Desert!!!

It's true!  She made the first stop on her World Tour (really, something as incredible as a World Tour has to be capitalized :)) at Kirsten's house.  Kirsten and her family gave Phyllis a warm welcome and showed her a truly amazing time, including some important firsts for her: 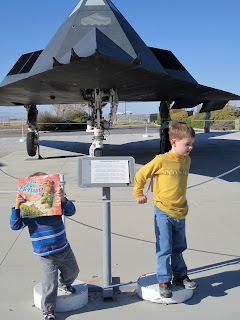 As you can see, this picture was taken after she had successfully landed the plane.  That Phyllis is a born pilot :)


First Time In A Joshua Tree 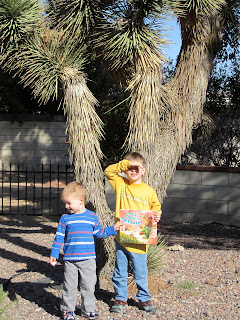 Actually, it was the first time she had even SEEN a Joshua Tree.  This picture was taken after she climbed down because furry brown groundhogs don't show up well against furry brown bark.  But in case you didn't know, groundhogs are members of the squirrel family and they can climb!

For a detailed post on Phyllis's first stop in California, hop on over to Kirsten's blog.  (For those of you ahead of me in time zone, or any other early birds, if the link doesn't work right away it's because Kirsten is 3 hours behind me and her post may not be up yet, and I won't have a post-specific link until later today - but I will update the link, I promise!)

Phyllis is now on her way to Texas, where I hear Natalie has wonderful things in store for her visit.  We will keep you posted.  And by gum, I'd better get that extra tab up top pretty durn soon! *scribbles on very long to-do list!*

After all that excitement, you can probably barely concentrate on regular life, but let's give it a try.  Most likely some chocolate would help, even though it's not Wednesday :)

Today's Oh Susanna question comes to us from Penny.  She says:

"When I have searched the internet in search of agents, some sites point out that some agents are more editorial than others.  What exactly does this mean?  Will an agent actually make specific changes to your manuscript or will they give general feedback and have you make the changes?"

This question is both easy and hard to answer.

Some agents are quite "editorial".  They read a MS and give very specific suggestions for change and improvement.  I'm sure it is up to the author to actually make those changes, but they are quite specifically suggested in some cases, and the understanding is that without the changes the agent won't send the MS out.

Other agents are not editorial at all.  They read a MS and say, "Yes, I'll send it out," or "No, this one doesn't work for me," end of conversation.

Still other agents fall somewhere in the middle.  They may give a broader, less specific suggestion, for example, "Change the beginning," or, "It needs more emotional tension," or "Give me a better idea of who exactly Jenny is" but they don't give you suggestions as to how to achieve that, or any kind of specific details.

The harder side of the question is how to find out how "editorial" an agent is when you're looking and thinking about submitting to them, and what kind of agent/amount of editorializing works best for you, which you may not know until you've gotten a little further in to the publishing process.

Some writers want a lot of hand-holding.  They like agents who will give them a lot of very specific feedback.  Other writers can't bear to have someone else monkeying so much with their work.  (Still others would never dream of having an agent at all, but that is a whole nother issue!)

Finding the right agent is about so many things - personality, taste, and amount of editorializing being some of the key questions you need to address.  It's especially difficult because it's possible that the only agent offers you get might be from people whose style doesn't match yours.  Then you have to think long and hard about what you really want.

For my part, I do have an agent.  (As you can see in my sidebar - Liza Voges of Eden Street Lit :))  She has a lot of experience, an encyclopedic knowledge of the publishing world, and a keen sense for what works and what doesn't.  I would rank her somewhere in between on the editorializing scale.  If I send her a MS she thinks she can't sell, she'll just say so.  If it doesn't work, she won't waste my time or hers trying to force the issue.  If I send her a MS she thinks is really strong, she sends it out.  If I send her one where she feels there's potential but I haven't pulled it off right, she'll give me a general comment like, "Try to write it more from the baby's POV" or "The end is too abrupt."  Then it's up to me to figure out how to make changes that will make the MS work for her.  Sometimes I can, and sometimes I can't.

No matter who your agent is, though, they won't (and shouldn't) do your job for you.  It is up to you to give them only your very best work.  Too many half-baked, sloppy MSS will find you looking for a new agent.


I know a number of people who read this blog have agents.  It would be wonderful if you would share your thoughts and experiences in the comments for readers to learn from!  If you can share your agent's name and how "editorial" she/he is, I'm sure that would be very helpful to people starting their search!
Others of you, what would you look for?  Would you prefer a lot of editorializing or a little?