Taking a little break from my mother-in-law (with whom I've spent so much time lately that her senior confusion in rubbing off on me to the point that I'm not sure what day we're on, only that my posting schedule is completely off!) I have a funny story to share.

Those of you who have spent any time around this blog know that I live in the middle of nowhere, on a mountain which is known to the locals as Blueberry Hill.

It is like Wild Kingdom up here.  We have all the usual species - deer, turkeys, squirrels, raccoons, possums, woodchucks :), skunks etc,. but we also have coyotes, bobcats (very elusive, but spotted now and then) and black bears.

Our bear wakes up around the second week of April but usually doesn't make his first appearance until the third week - maybe he needs time to straighten his bed head before being seen in public :) 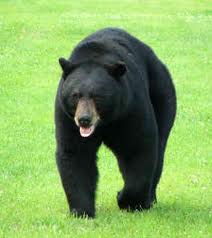 We have actual video footage of him playing with the swing set - if I could figure out how to get it off the ancient video tape and onto the internet I would show you, but alas, that will have to wait for another day and someone more technologically savvy...

So anyway, we keep a bird feeder up in the winter.  We put it up around Thanksgiving, after the bears have gone to bed, and take it down at the beginning of the third week of April when we know the bears are likely to be back.

A couple times, our bear has beaten us to it - knocked the pole that holds the feeder flat and dented and emptied the feeder.  He sits on the ground while eating and leaves a giant, unmistakable butt print.

But this time, he took it to a whole new level.

When I went out to fill the feeder, it was gone.  Clean gone!

He had taken it off the pole and carried it away with him - breakfast to go!

Apparently, we will have to buy a new feeder for next year...

Meanwhile, we seem to be running breakfast take-out for the Wild Kingdom.

You may place your orders below :)