The 2013 Holiday Contest - Judging In Progress! 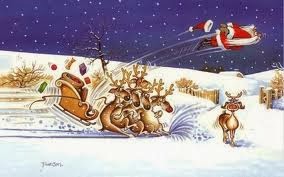 Once upon a time, a picture book writer who also writes a blog thought it would be fun to have a little writing contest.
"Writing is hard," she said to herself.  "Writing can be lonely.  Writers are faced with a lot of waiting and a lot of rejection.  We can all use a little motivation and fun and instant gratification... and some prizes :)"
So for Halloween in 2011, she made up a contest, provided a prompt, and posted some rules and a sample entry.
She got 7 contestants!
"Not bad," she said to herself, "especially considering the freak snow storm that dumped 2 feet of snow on Halloween and totally knocked out the internet for 4 days!"
She and the writers who entered had tons of fun writing their stories and reading each others', so she decided to do it again.
She ran contests at Thanksgiving, Valentines Day, and 4th of July.
She ran a birthday contest, and a contest for welcoming spring.
She pretty much just made stuff up to suit her fancy in the hopes that other writers would enjoy both the opportunity to create a new story and the chance to read the stories written by everyone else.  After all, in most contests you never get to see the competition!  In her contests you get to read everything if you so desire, AND get lots of positive feedback from the people who read your work (a nice change from waiting and rejection :))
On December 9, 2013, she posted the rules for the 3rd Annual Holiday Contest.  She tried to pick good prizes, and hoped that people would want to give it a try.
"It's a busy time of year," she said to herself.  "It will be lovely if we get 30-40 entries.  It will be a miracle if we get 50-60."
So imagine her surprise and delight when she received not 30 or 40 entries, not 50 or 60 entries, but ONE HUNDRED AND EIGHTEEN!
"Holy Holly!" she said to her husband, her kids, her dogs... pretty much anyone who would listen :)  "Who'd have ever thought we'd get so many?!"
And she spent a very happy week reading fabulous story after fabulous story, and marveling at the talent and creativity of so many writers who took the time to join the fun.

You'd think that would be THE END, wouldn't you?

But NO!  Because this is a contest, and a contest means competition, which means some entries have to be selected as standing above the others.

So now the writer had her work cut out for her!  How to narrow down a field of 118 fantastic entries to a manageable handful of finalists?

They each ranked the entries.
They compared notes.
They discussed.
They re-read and re-ranked.
They had more caffeine and snacks.
They argued over kid-appeal, mishap-ness, and writing and story quality.
And they burned the midnight oil... and the candle at both ends.

And then the writer took a little break around midday on Sunday to let you know how the judging was going (ACK!!!! YIKES!!! HOW WILL WE EVER CHOOSE???!!!) and to give her chance to say, WOW!  You guys are amazing!  You have made the judging practically impossible!  We love all your stories.  Every single writer who showed up to write a story and share it is a winner, and there isn't a single entry that doesn't have something we like, some reason why we'd like to keep it in the running!

So please know how much we appreciate all of you - your effort, your creativity, your talent, and your generosity for sharing your stories and taking the time to read and comment on other people's stories - even though in the end, with a field of 118, most of you cannot be chosen.

Back to the judging currently in progress...