The Halloweensie Contest Finalists - Vote For Your Favorite!!!

The time has come, the walrus said, for the Halloweensie Contest Finalists to be revealed!!!

I can just feel the very air quivering with excitement!!!

Let me just say that I was bowled over - by both the number and the quality of the entries!!!  I NEVER expected a turnout like this!  I was so happy at the response and enthusiasm - really it was just wonderful!  I had SO much fun going around to read each new entry as it was added to the list - each better than the last.  I hope you all had as much fun with it as I did.

Now, I realize I said I'd try to narrow the field down to 3 finalists, but you all know I can pretty much never do that anyway :) and that was before I knew there were 38 entries!  And in this case there were so many great entries that cutting any of them was brutal!  So after much hemming and hawing and gnashing of teeth and consulting with my lovely assistant, I have ruthlessly done away with more than 75% of the competition - much as it pained me! - and have left you less than a quarter to choose from (and that's just as close as we're going to get to correct percentages because math is not my thing!)  And I'd like to say right up front that many of the entries that were cut I was EXTREMELY nitpicky about because I had to cut something!  They were all excellent!

So, with GREAT FANFARE, here are the finalists!  They were chosen on the basis of kid appeal and quality of story within 100 words - tough criteria.  Please read through and then vote for your favorite by Thursday November 8 at 6 PM EST.  In the interest of trying to help you be objective they are listed by title only - no author names for now (though of course if you have photographic memories and remember who wrote what I can't help with the objectivity :))

I would also like to add that, for spookiness/creepiness, Renee ('round the moonlit town) and Sidney (The Last House) should receive honorable mention.  And for the other 2 stories that I finally cut because I decided 10 finalists was just too many and these were a little more like character sketches than stories but still really, really good, honorable mention to Cathy (The Halloween Queen) and Lauri (No Trick-orTreating For Jack).  But really - excellent job EVERYONE, and thank you all for providing us with such fantastic Halloween entertainment!

There was a little witch
who kept a little bat
high upon the top
of her little pointy hat.

Every Halloween
when she would trick-or-treat,
the little bat would swoop right down
and grab an extra sweet.

The bat knew this was sneaky,
impolite and , yes, uncouth—
But when your home’s a witch‘s hat
you MUST tend her sweet tooth!

#2 The Witches of Fairy Top Hill

On Halloween eve up on Fairy Top Hill,
A trio of witches, Pam, Tamsin and Lil,
Were practicing magic and chanting out loud,
“Bat-candy, bat-candy…rain down from that cloud!”
“Kaput! and Kabob!” Pam invoked with a shout
The sky quickly filled with a hover of trout.
“Kibosh! and Pish-posh!” Tamsin yelled with finesse.
A chorus of frogs joined the fish-slippy mess.
Then bold Lil spoke up, “This is Trick-or-Treat night,
And children get candy and Turkish delight.”
Costumed as young children…with treat bags to fill,
The trio went guising, Pam, Tamsin and Lil.

Chloe was a scaredy witch. She was scared of bats, jack-o-lanterns, and most of all, costumed trick-or-treaters. Her sister Mavis told her, “Don’t be a scaredy witch! You’re supposed to be the one scaring people on Halloween.” With Halloween days away, Chloe worried about the trick-or-treaters who would visit. Maybe she would hide until Halloween was over. She found a sheet, and draped it over her head. Mavis walked in and screamed. "You frightened me!" said Mavis. Chloe suddenly felt braver with her sheet. So on Halloween night, she wore the sheet and happily greeted trick-or-treaters at the door. “Boo!”

The wee witch is very excited,
her pointed toes quiver with glee.
Today is the day
all the ghouls come to play.
This night will be super spooky.

Bent tree branches scratch at the windows,
carved pumpkins do flicker and scowl.
Dry leaves fly and swirl
as the bats start to whirl,
cold wind swoops around with a howl.

Her cauldron glows green as it bubbles,
the wild creatures party all night.
No one on this street
dares to come trick or treat.
They're all in a shivering fright.

Ghost heard an eerie sound.
Hee-hee-hee-hee!
He trembled beneath his sheets.
Ding-dong-ding-dong
Ghost froze. "It's probably just a bat," he said.
He hid behind the curtain and peeked out his window.
Princesses, fairies, and superheroes roamed the streets singing, "Trick or treat!"
"How could I forget?" said Ghost.
He called Mummy, Skeleton, and Witch.
"It's Halloween!"
They dashed out of their house.
"Boooo," wailed Ghost.
"Muahahahaha," cried Mummy.
"Ah-ah-ah-ah-ah!" chattered Skeleton.
"Ack-yak-yak-yak," shrieked Witch.
They scurried to the streets, running amuck until they reached their hiding place.
A banana whizzed by them.  "This is the scariest Halloween ever!" said Ghost. 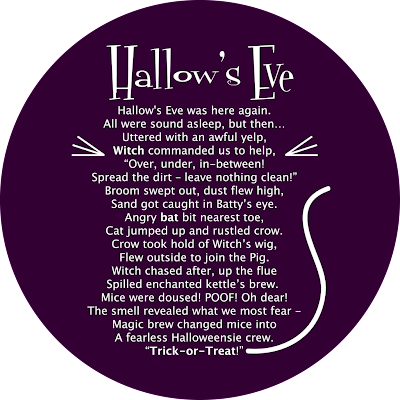 Winifred stared at the calendar, “It’s Halloween!
Unimpressed, her black cat, Ebony, turned away and returned to slumber.
“I know witches are supposed to like Halloween.  But I don’t.  Halloween drives me batty.  I never want to hear  “trick-or-treat” again.”
Winifred grabbed her Spell Book and turned pages, “No . . . No . . . Not a chance . . . Hmm . . . Maybe . . . No . . . YES!”
Winifred chanted as she tossed ingredients into her cauldron:
Eye of Newt, Hair of Dog, Wing of Bat
Just for today . . . turn me into a Cat!
*POOF*
Winifred padded over to join Ebony for a cat nap, and purred, “Better catty, than batty.”

Jack O’Lantern was an orange-headed kid
With a very round face, a stem on his lid.

On Halloween night, Jack met an old witch.
He begged for a spell and presented his pitch.

“I want to trick-or-treat like a regular boy
In spooky attire.  I love Almond Joys.”

Jack guzzled her brew, full of bat wings
And all sorts of other odd, horrible things.

“My pumpkin head’s gone! I feel….BOO!” Jack haunted.
“Turning into a ghost was not what I wanted.”