Summer is always a busy time.

And this has been a particularly busy week on Blueberry Hill - a week of Somethings New.

We got a new granddaughter :) 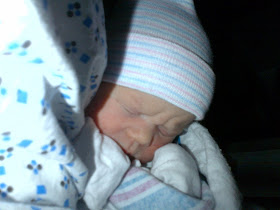 Can you imagine ever being that small, or remember when your kids were?  And what is it about babies that just melts us all into puddles of mush?  I don't think it's possible to be around babies without feeling like you're overflowing with happiness :)


We have a newly wisdom-toothless child - the second full set of wisdom teeth out in one month at our house (and no, we do not have dental insurance - ouch!)  Not so much sunshine and happiness on this front (and no pictures of the chipmunk cheeks!), but at least it's over and done with.

And finally, I have something else new to share with you.  (And forgive me in advance... I realize I'm edging into questionable territory here, but I can't help myself :)  If you can't share with your friends, who can you share with?)  The other new thing is a new album called Don't Look Back.

My husband, Eric, in addition to his many other wonderful qualities (which I will refrain from enumerating lest you accuse me of sounding like a lovesick teenager :)) is a singer/songwriter who writes all his own music and lyrics and has recorded several albums.

As writers, some of us published, some of us pre-published, some of us published once upon a time but going through a long stretch of nothing new, we can all understand the challenges of trying to become known and/or recognized in a competitive industry.  Especially with the advent of the digital age and the infinite bookshelf (and whatever you'd call its equivalent in music - the infinite playlist? :)) the knowns stay known, and the unknowns get harder and harder to find regardless of how much they may have to offer.  So much talent.  So many wonderful books and so much great music.  It can be hard to get noticed.

All of this to say, if you've got a few spare minutes and would like to visit Eric's website, listen to a song or two, and maybe, if you like anything you hear, download a song or two (they're only .99) it would really make his day to know that some new people were hearing and enjoying his work.  (And it would make my day to see him happy and excited because some new people were liking his music :))  He has not asked me to do this (or even hinted at it) but I thought to myself, maybe some of you in this generous community might be interested, so why not share?  He has just updated his website, added the new tracks, and put up his new music video, so it's the perfect time :)

Probably my favorite track from his new album is called The Question Why.  In addition to being upbeat with the kind of tune that gets stuck in your head, it features our daughters on back up vocals and our son on bass guitar (and not just because they're part of the family - they are all very musical - and I am not at all biased :))

Anyway, he works very hard all the time on many things, doing so much for all of us as a family, that I wanted to do this for him - let you all know in case you might be interested.  He's not super active - he doesn't have time - but you can follow him on Twitter if you care to boost his follower list :)  And it would be the best kind of day for him if a bunch of new people purchased some of his songs.

So that's it.  Thank you for indulging me in this slightly unusual, off-the-track post :)  Please feel free to spread the word to anyone you know who might be interested!

Have a marvelous Monday everyone!  I'm off to drool over that sweet baby :)